For the second time in the last 30 days, Animal Advocates was in room 307 at the Vancouver Provincial Court on Main Street to find out what would happen with Captain’s owner, Brian Whitlock. (If you are unfamiliar with this story, read the background here.) 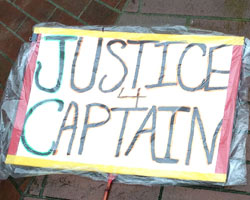 And, for the second time in the last 30 days, Whitlock’s lawyer requested a delay. He asked for more time to go over some material he had just received — a large package of disclosure and a 50-page letter from Brian Whitlock. The judge allowed his request.

The next date is March 26th at 9am. We will be there once again. And hopefully, this time, for the sake of our sanity, something will happen.